I wanted to make something ‘light’ to finish my meal last week. The cover recipe on the latest Good Food Magazine stood out for me.

Yes, that’s cheesecake in a cake.

Ok, that doesn’t sound very ‘light’, but the strawberries count as one of your five (or 7) a day, almonds are good for your skin and hair, and calcium in cheese is good for your bones. Sounds healthy to me.

I substituted the strawberries for the raspberries, and didn’t have any almonds. So mine didn’t look quite as pretty as the cover of the magazine, but on a rare summery day it was really delightful after an early dinner. The tangy raspberries and the creamy hidden cheesecake bits, mmm, dreamy. 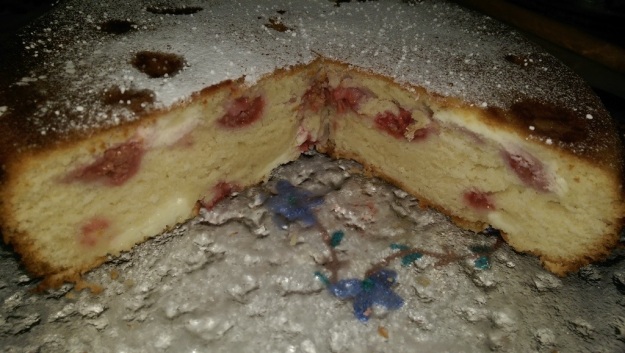 After going on and on and on (and on a bit more) about how much I wanted the Yotam Ottolenghi book Jerusalem, after receiving it, I put in on the bookshelf and forgot about it.

Being on a bit of a health kick, I decided I couldn’t have cake for dinner (on my next post you will see I changed my mind on that :p ) and decided I wanted something tasty and colourful. Flicking through the Waitrose magazine (May’2014) I found an Ottolenghi recipe for ‘Fried Aubergine with Leaks and Tomatoes’. 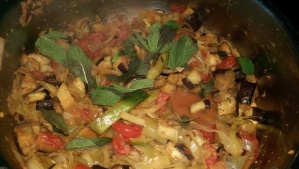 Fried aubergines as tasty as it sounds are not particularly healthy, so I baked them instead. I’m sure greasy, fried aubergines would have tasted nicer, however, I don’t think baking them took much away from the meal, it had a mild heat from the spices (cumin and fresh green chilli) and was very tasty, served with giant couscous.

To accompany my main, I decided on a classic Middle Eastern salad, fattoush.  Using the recipe from ‘Jerusalem’. This was perfect for me, colourful,fresh vegetables in a light dressing. I’m not crazy about vinegar, and this had just the right amount (as in, I couldn’t taste it). The recipe called for not toasting the flat bread pieces, but I really like the crunch of it so toasted mine before mixing in. 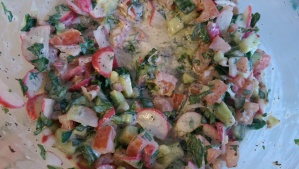 A healthy meal, which everyone enjoyed.

I’m sure I won’t be keeping the book to gather dust for too long!

When craving jam tarts, I decided on these mini-jam tarts. The pastry was very easy to make and easy to work with. I used my mini cupcake pan to make them, and used a fluted cookie cutter to cut the pastry to shape (choose one size up from the one that just fits the pan, so you get a decent edge to fill with jam).

After filling with jam, being careful not to overfill as it will bubble over during baking; 2/3 of a teaspoon should be okay, I topped with a heart/star made from left over pastry (hearts=apple and blueberry, stars=raspberry).

The chronicles of a Brown Muslim Woman navigating the Big White World.

... a few of my favourite things

enter the world of me and my baking adventures

Jane's Patisserie
What Jessica Baked Next...
The Greedy Foodie

enter the world of me and my baking adventures

A Jewish family's journey through Palestine

Made by Shana
Cooking Without Limits

Easy vegan meals made with love and compassion.

Searching for Wholeness and Finding Grace